Tracksuit & Bag Distribution is a project to give tracksuits and bags to the public school students of rural communities, especially in Gorkha district. The project was born because we realized the importance of a project that can be quickly initiated and completed but solves important problems. The project has been designed in consultation with school headmasters, teachers, students and local governnment authorities such as ward office and rural municipality office.

In Jan 2020, as a pilot test for this project, we distributed tracksuits to 1,550 students in a few public schools of Arughat Rural Municipality. This led to more requests for tracksuits from many schools of Gorkha.

And, in our current phase, we will be distributing both tracksuits and bags in to 10,300 students in three rural municipalities. They are:

Chum Nubri Rural Municipality: It lies in the northernmost part of Gorkha. It shares a large portion of its borders with Tibet and many of its inhabitants go to Tibet for trading and work. Its total area is 1,649 square kilometers and is divided into 7 wards. It has 19 public schools and 1,350 students. Even though Chum Nubri has bigger area, its population is smaller compared to other rural municipalities because it is located in high altitude and a large part of its area is uninhabitable Himalayas.

Dharche Rural Municipality: It lies in the northern part of Gorkha district. It shares some of its borders with China. Its total area is 551.52 square kilometer and is divided into 7 wards. The rural municipality has 25 public schools and 3,750 students.

Bhimsen Thapa Rural Municipality: It lies in the southern part of Gorkha district. Its total area is 101.35 square kilometer and is divided into 8 wards. The rural municipality has 40 public schools and 5,200 students.

Nepal has private and public systems of education. Private schools are expensive, found mostly in urban areas and attended by the children from stronger economic backgrounds; whereas public schools are cheaper, found in both urban and rural areas and attended by the children from weaker economic backgrounds. Public schools are largely funded by the government and also by donors who want to help poor kids. These schools don’t have sufficient facilities that the students can use. Especially the public schools of the mountain communities face more challenges. They are underfunded and need more help.

We’ve identified the need for tracksuits and school bags for the poor schoolchildren of the mountain communities. These students have only one set of school uniform which is mostly dirty and torn. And, a lot of them don’t have bags, and carry books and notebooks in their hands or in plastic bags.

In a pilot test conducted for the project in Jan 2020, we distributed tracksuits to 1,550 students of a few public schools in Arughat Rural Municipality. The test was positively received by all and the word about it quickly spread. We received requests from many schools and local government officials from all over Gorkha for tracksuits to be distributed to their students.

Our final goal is to distribute tracksuits and bags to all the public schools students of Gorkha, which is above 60,000. But that will depend on the funding available to us. If we get donors, we will cover all students of Gorkha. But for now in this phase, our current goal is to help 10,300 students from Chum Nubri, Dharche and Bhimsen Rural Municipalities. We are starting from higher villages and will move to others areas.

Each student from three rural municipalities will get 1 tracksuit and 1 bag. The students from Chum Nubri and Dharche will receive 1 liner with the tracksuit because these two rural municipalities are located in higher altitudes and therefore have colder weather. The students from Bhimsen won’t receive liner as the place is located in lower level.

The student details of each rural municipality are as follows:

We have made a huge progress in our project. This month, from Oct 31 to Nov 03, we completed the distribution of tracksuits, schoolbags and notebooks in all the remaining wards (Ward No 2, 3, 4, 5, 6, 7 & 8) of Bhimsen Thapa Rural Municipality. Bhimsen is one of the important areas of the project and we are proud to have provided the items to all the public school students of this rural municipality.

In total, 5,450 students of Bhimsen Thapa RM have benefitted from this project. In March this year, we had distributed the items to 1,078 students of Ward No 01. And, in November this time, 4,372 students of the remaining wards received the items, just at a time when the winter is about to start.

Soon after the first distribution in Bhimsen Thapa RM in March, Nepal had the second wave of the Covid-19 pandemic that caused nationwide lockdown. As a result, the schools were closed for a long time and they started the physical classes only before the Dashain festival.  In addition, the Covid-19 lockdown also caused the delay in manufacturing of additional tracksuits, schoolbags and notebooks. When the lockdown was eased up, the monsoon rains prevented us from organizing the distribution. This year the monsoon season lasted longer and we had many stronger & continuous rains.

We found the right time for distribution, just before the Tihar festival started. The winter is also just about to start, so we had to hurry up our distribution too. So, from Oct 031 to Nov 03, the Sambhav Nepal team lead by our Founder/President Prem K Khatry visited Bhimsen Thapa Rural Municipality and handed out the items to 4,372 students of all the public schools in Wards 2 to 8. It took us four full days to complete the work in this rural municipality and now the students will be able to use, especially their tracksuits, in this winter season.

Our project will now move to Dharche Rural Municipality. We are preparing the logistics and will soon depart for Dharche to carry out the distribution.

This distribution directly benefited 1,078 students of 6 schools. The names of the schools are:

We will continue our distribution project to the remaining wards and schools of Bhimsen Thapa Rural Municipality which has a total of 43 schools and 5,345 students. Once we have fully distributed here, we will move to Dharche Rural Municipality.

In February, we started the project after completing all the necessary paperwork and manufacturing the items required for one rural municipality. We inaugurated the project by distributing tracksuits, schoolbags, woolen hats and notebooks in Tsum Nubri Rural Municipality. This has directly benefited 1,412 students of 20 public schools. Each student received one set of all four items.

We couldn’t visit all 20 public schools due to time limit. Plus not all schools are connected by roads. Tsum Nubri is the northernmost region of Gorkha district and lies in high altitude Himalayan region and shares its northern borders with Tibet. So, we called teachers from other schools so that they can come to pick up the items for their students.

Our project is moving forward smoothly. The following are the tasks we have completed:

In the future, we will complete the following tasks:

After we distribute tracksuits and bags to 10,300 students, we will move to other rural municipalities. It will be better if we can continue this project for next years which will be enough to distrbute tracksuits and bags to all the students of public schools in Gorkha. But that will depend on whether we get donors for next phase. If funding is available, we surely want to help all students.

Back in Janurary of this year, we conducted a pilot test for the project. At the time, we distributed 1,550 tracksuits to a few community schools of Arughat Rural Municipality. The response from the test was positive. We received requests from many schools and local government officials from all over Gorkha for tracksuits to be distributed to their students.  That motivated us to take our idea further and start the full project. We also decided that it’s better to distribute tracksuits as well as bags in higher villages first and then move to lower areas. 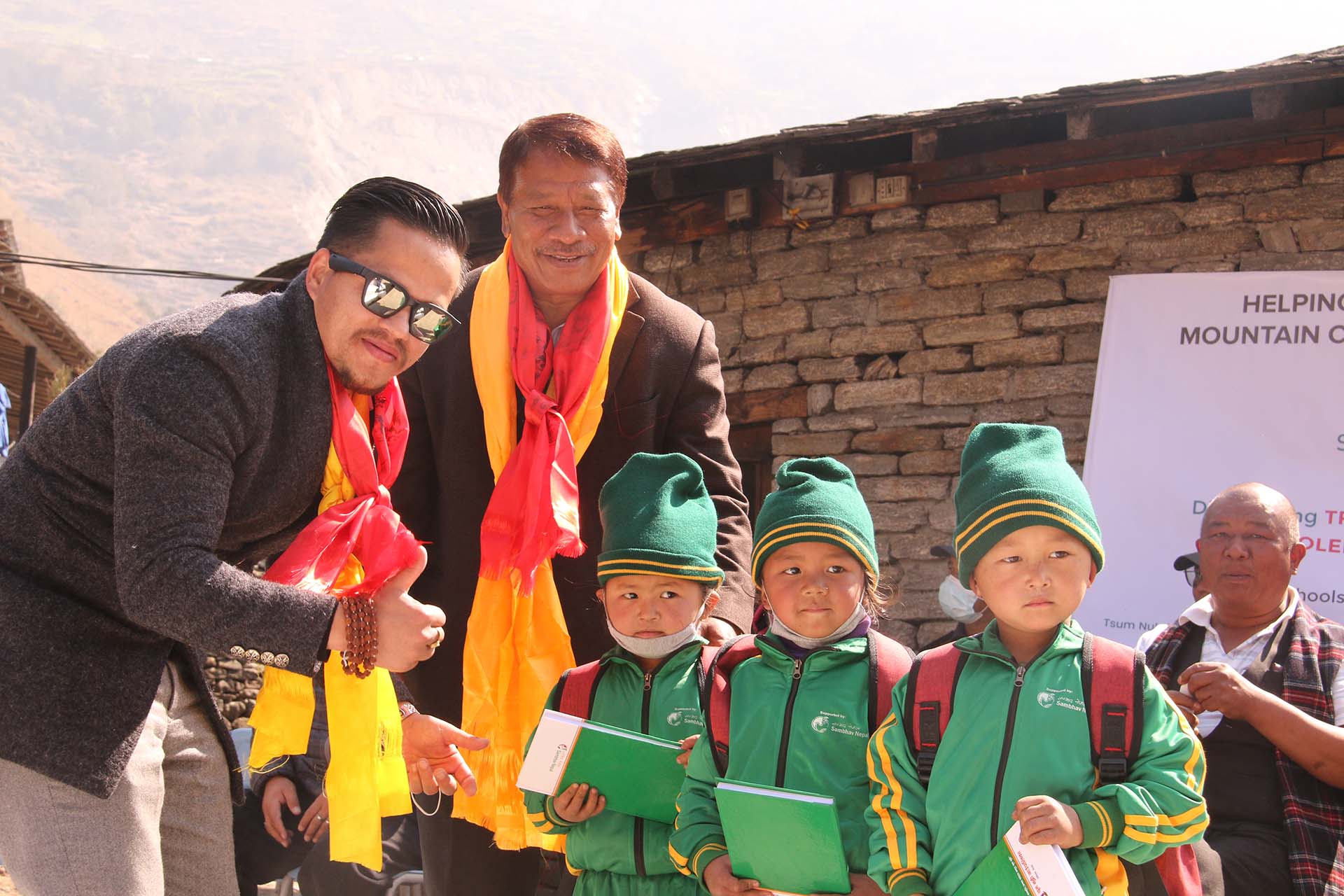 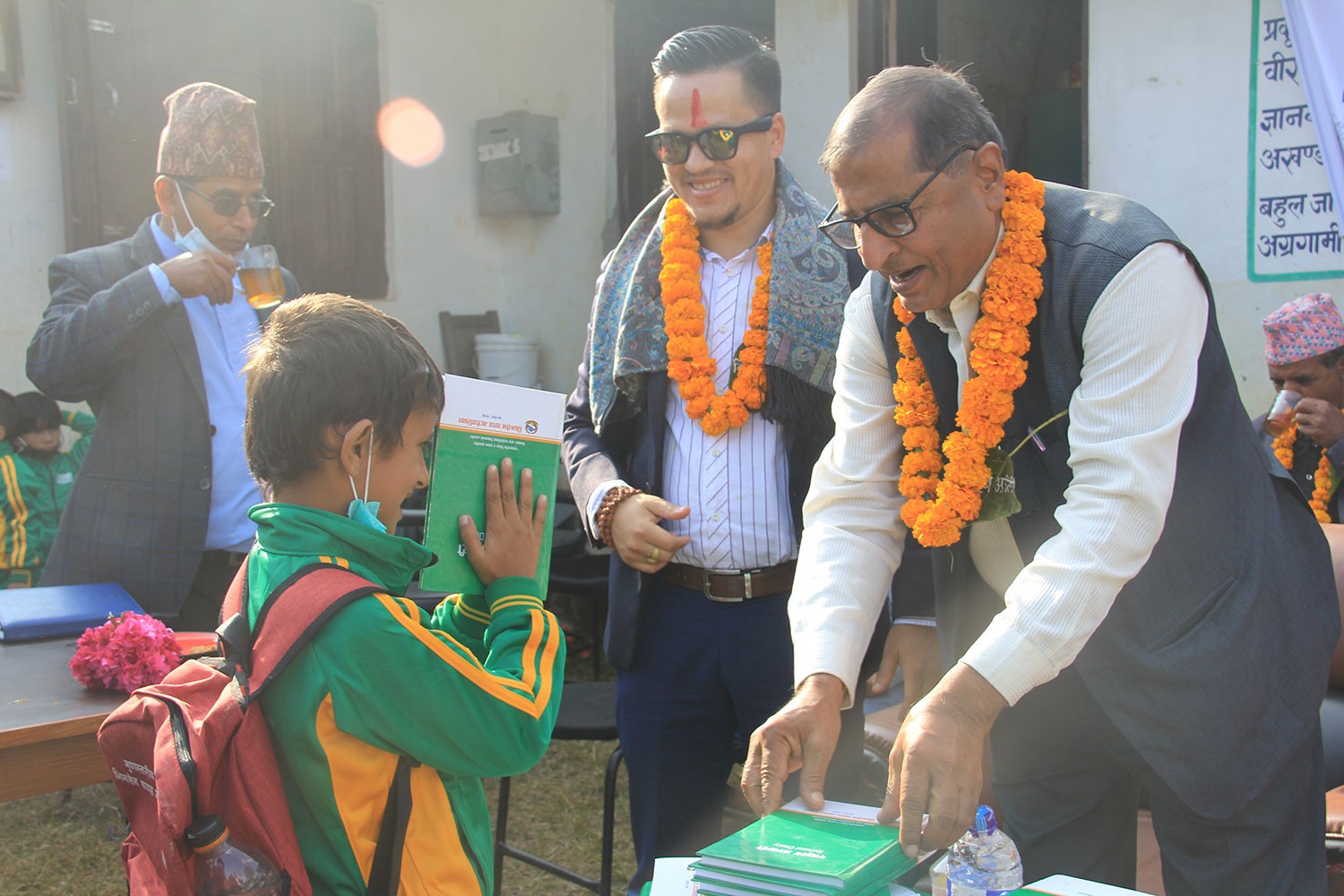