Himalayan Ambulance is a health project to give life to the people who are near to their death. It provides 4WD Mahindra Bolero ambulances to local governments (municipalities and rural municipalities) who will then run affordable ambulance service to mountain communities, most of which are people from economically disadvantaged backgrounds. The project has been designed in close consultation with health experts, locals and officials of local government authorities. Through the project, we strive to improve the health situation of the local people and help them get medical treatments sooner.

In the first phase of the project, we provided the following number of ambulances (6 out of target 20) in these places:

These are the remaining places of Gorkha where we will distribute the following number of ambulances (7):

Depending on the funding available to us, we will also distribute the ambulances in neighboring district Tanahun which is mountainous and rural just like Gorkha and is in huge need of ambulances for its poor and needy people. The ambulances given to municipalities/rural municipalities of Tanahun will benefit its surrounding districts such as Kaski and Lamjung too.

Here are the maps of Gorkha District, and Nepal & Gandaki Province:

Nepal is still considered an underdeveloped country. It is growing in some fields but not as much as other developing countries. It is still lacking behind in many facilities and has many problems, especially in rural areas. Lack of proper transportation is still one of the biggest problems in such areas and among the transportation service, medical transport service such as ambulance, especially in the rural mountainous areas, is hardly available or there is none at all. The villages are linked with muddy dirt roads and have less number of local public vehicles for transportation. Local vehicles aren’t designed to carry sick patients in mountain roads and they aren’t easily available everywhere. Due to which, people still need to walk for miles or be carried on stretchers to go to the nearest health post.

This is where the project Himalayan Ambulance comes in. The health project gives hope and opportunity by providing ambulance service to the sick people of the rural communities of Gorkha and neighboring districts.

Our proposed target is to provide 20 ambulances to cover Gorkha and neighboring districts.

In the first phase, we provided 6 ambulances out of 20 (which is our target) to 1 municipality and 4 rural municipalities of Gorkha district. It was a grand success.

In the second phase of the project, we want to distribute 7 ambulances, which is also the minimum requirement for starting the next phase. The 7 ambulances will be given to the remaining 1 municipality (Palungtar Municipality will receive 2 ambulances because it has bigger population) and 5 rural municipalities of Gorkha. With the second phase, we can fully cover all of Gorkha and all 275,000 people of this district will benefit. The neighboring districts will also benefit as the people living there can use the ambulances even though the ambulances are owned by the local governments of Gorkha.

In the third phase, we want to distribute the remaining 7 (out of 20) to the neighboring district Tanahun. The locals and community leaders from this district saw the news about the first phase, and as they are also in need of ambulances to carry their ill patients, they asked us if we could also help them. Tanahun is mountainous and rural just like Gorkha and have a large number of poor and needy people who can’t afford to hire their vehicles for transfer of patients. In addition, the ambulances given to the municipalities/rural municipalities of Tanahun will benefit its surrounding districts such as Kaski, Lamjung, Nawalpur, etc.

When the project is completed and all 20 ambulances have been distributed, more than 1,500,000 people will be benefitted. The project will have ambulance operations all over the Gandaki Province.

The ambulances are properly fitted with necessary equipment to ensure they are fully protective and can be used during any health crisis. During the second wave of the Covid-19 pandemic in Nepal, we designed the ambulances to safely carry Covid-19 patients to hospitals and health posts as that is the main need of the hour. All the remaining ambulances will be fitted with 2 stretchers (In the first phase, we provided 1 stretcher per ambulance), oxygen cylinder and its mask, thermal gun, waiting seats and other necessary medical equipment.

This project has a huge support from both communities and local governments (municipalities and rural municipalities). They have expressed their commitments to make the project successful. The local governments will ensure the full running of the ambulances. They will separate money from their budgets for driver wages, fuel, vehicle repair & maintenance and other unforeseen expenses. In addition, ambulances have full support from the central government as well. The vehicle import tax can go up to 300% in Nepal but for ambulances, they can be imported without any tax fee.

There will be a certain amount of fee which will be collected from those can afford to pay. But for those who can’t pay and are from weak economic backgrounds, the ambulance service will be provided free of cost. The local governments have data about their population as they need for various development & governance purposes, so they will be able to properly identify who can and can’t afford the ambulances. Then they will accordingly ask for fees which will go towards paying the vehicle fuel.

The fees along with the annual government budgets will ensure the ambulance service continue to operate for many years into the future and the locals can receive their medical treatments faster.

On June 09, 2021, we distributed 6 fully-equipped 4WD ambulances and essential medical supplies to 1 municipality and 4 rural municipalities of Gorkha district.

The distribution program was held at Gorkha Municipality Office and was attended by Chief District Officer of Gorkha, Chairpersons of the chosen municipalities and rural municipalities, community leaders, health workers and journalists. Our Founder Prem K Khatry represented Sambhav Nepal and personally handed over the ambulances along with medical supplies.

The government representatives and officials were extremely happy to have received the ambulances and medical equipment, especially now when the Covid-19 crisis has put great pressure in the health system of Gorkha. The ambulances are equipped with oxygen and essential medical equipment and are designed to carry the Covid-19 patients safely to hospitals and health posts. The ambulances and various medical supplies we provided will be a big help to the health system of Gorkha and assist local governments to fight this pandemic and bring the situation to normal levels. Once the Covid-19 crisis is over, the ambulances will be used as the transportation for all kinds of patients in the remote villages of Gorkha.

Though the project is for fully-equipped ambulances, we also distributed medical supplies such as PPEs, full oxygen cylinders with facemasks, nozzles, meters & regulators, surgical masks, hand sanitizers, thermal guns, pulse oxymeters, surgical gloves, antigen kits, VTMs and face shields. This is because Nepal is facing the second wave of Covid-19 and we decided the medical supplies are also extremely necessary right now. It was the right call in our part as the municipalities and rural municipalities were very happy with the medical equipment as they are working hard to control the Covid-19 crisis.

We are extremely grateful to all our supporters who helped us make this project a reality and help the people of Gorkha and improve their health situation. This has become our most popular project so far. Because our work is highly appreciated by all, we received national media coverage.

After the success of the first phase, we are receiving calls from locals and community leaders of the remaining municipalities and rural municipalities of Gorkha, and neighboring district such as Tanahun which is as mountainous and rural just like Gorkha and has a large number of poor and needy people who can’t afford to hire their vehicles for transfer of patients. They all want to improve their health system and fully-equipped ambulances is a great step in that direction, especially during the Covid-19 crisis. We obviously want to help them but that will depend on funding.

We have completed a large part of the project. Currently our project is waiting for the local government offices of the selected Municipality and Rural Municipalities to open. They have closed their offices because of the Covid-19 pandemic and only provide emergency services.

We have completed the following tasks until now:

We have the following remaining works:

The project is estimated to be completed by May 31, 2021. But the project was affected by Covid-19 and lockdown. So, if we need to extend the project duration, we will do it accordingly. 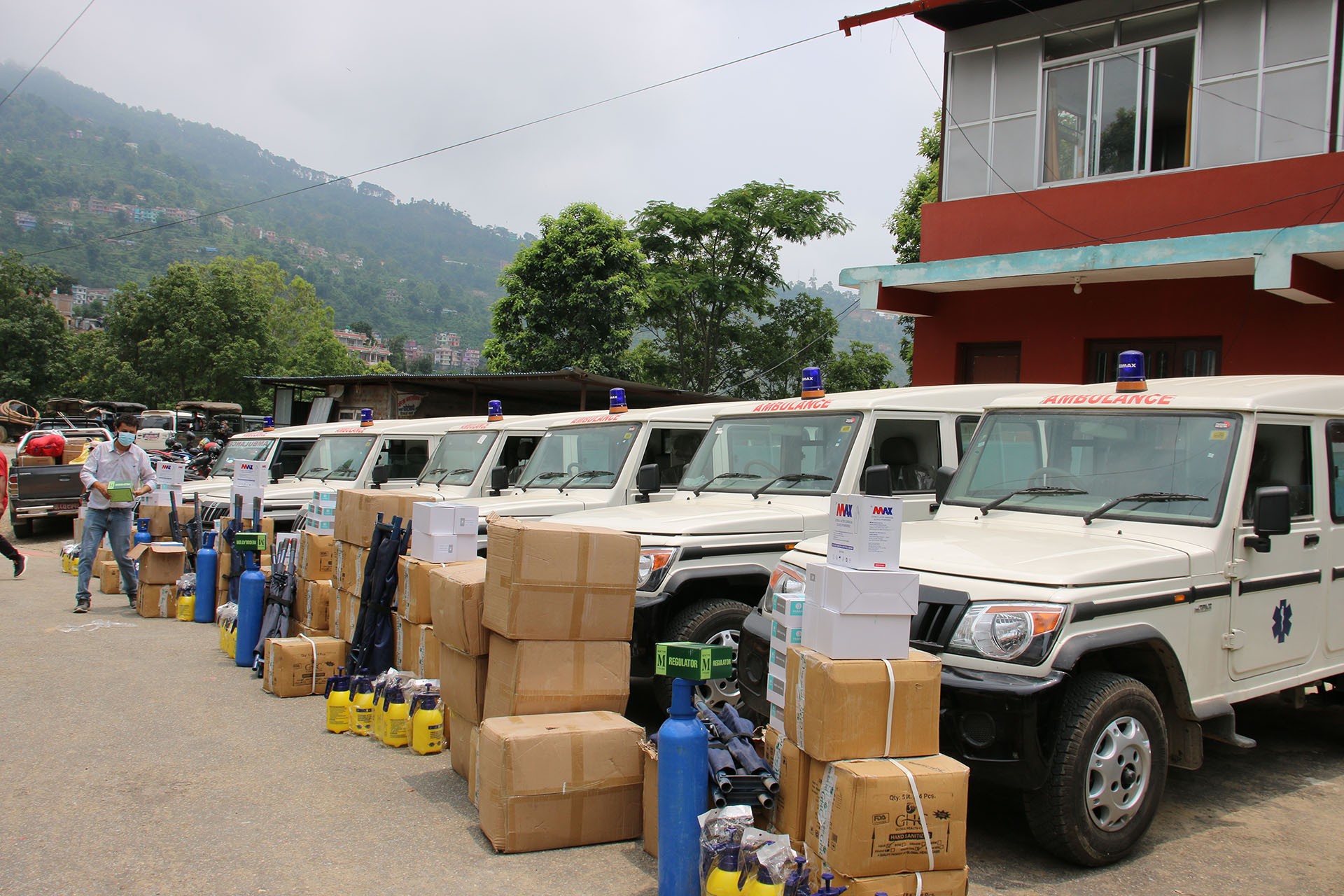