It was a cold winter morning when a group of nine students from UNSW, Sydney made their way to Manbu Village in Gorkha from Kathmandu. The group, having arrived in Kathmandu from Sydney, Australia on 24th November, 2016, had spent a day in the capital. They were here to help as volunteers at a village in Gorkha, the epicenter and the worst-affected district of the 2015 Nepal earthquake. Though a bit rough at the end, the ride to the village was a scenic one. Once the group arrived at the village, the villagers welcomed them with warm ‘namastes’ (greeting in Nepali) garlands and auspicious tikas (vermilion mark on the forehead).

The young students from the land down under spent a good ten days volunteering at the village. While some of them helped in the construction of Hostel of Bhawani Higher Secondary School, the scholarly ones took to teaching the young kids. The earthquake had damaged six of the school’s rooms and the volunteers went about helping the construction workers in repairing and rebuilding these rooms. During their stay, the volunteers were accommodated in tented camps. The campsite which was situated near the school, offered amazing views of Himalayan peaks.

On 7th December the villagers organized a ‘Farewell Program’ for the students before they left. While bidding them goodbye, the villagers expressed their gratitude to the students for coming such a long way from home to help them. They also expressed their hope that the students would visit them again and wished them well in their endeavors. After an emotional farewell and after spending days working hard at the village, the volunteers needed to chill. They headed to Pokhara to begin their Annapurna hike (Ghorepani-Poon Hill Trek, to be precise). Annapurna Region has probably some of the most visited trekking trails in the world. Not as tough and high as Everest trails, the trails to Annapurna are filled with easy up and down walks, beautiful rhododendron forests, spectacular Himalayan vistas and charming Gurung and Magar traditional villages.

The group began their hike from Nayapul (1010m) and trekked for two days before hiking to the vantage point of Poon Hill (3210m). From here they enjoyed some more inspiring views of the Himalayan mountains. On their return trek the students stayed over at Ghandruk, a Gurung heritage village. Soon they were back in Kathmandu and it was time for them to leave the country. The group’s memorable visit ended with a Nepali feast (farewell dinner) at one of Kathmandu’s authentic Nepali restaurants on the eve of their departure. 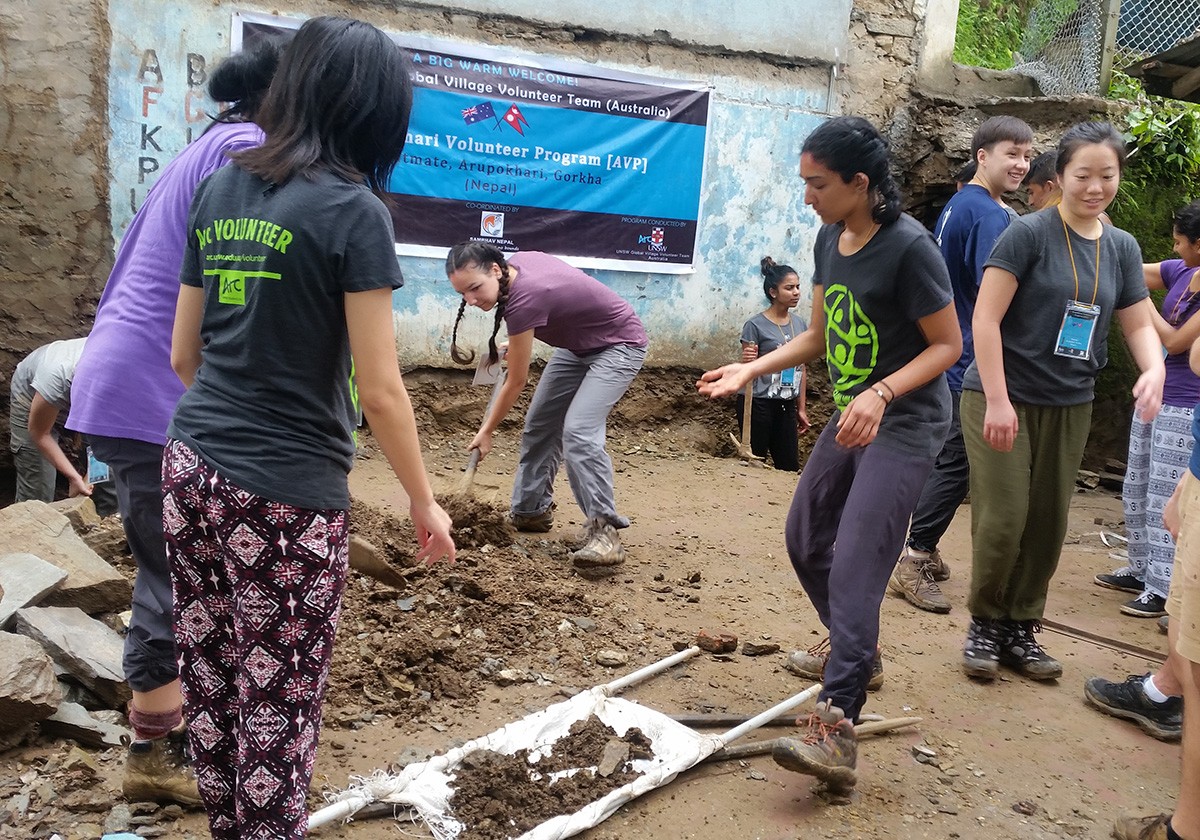 A total of 17 university students, who had signed up for UNSW’s Global Village, a student development program, arrived in Nepal on June 29, 2016. As usual they did a cultural sightseeing tour of various World Heritage Sites of the Kathmandu Valley on the next day. On July 01, the volunteers travelled to Ratamate village in the hard-hit Gorkha district in jeeps arranged by Ace the Himalaya, a local adventure travel operator. (The adventure company arranges logistics of the volunteering trips for Sambhav Nepal.)

In the past, Global Village teams used to volunteer only as teachers in community schools. But this time they participated to rebuild Bhairabi Primary School that has been affected by the earthquake as well as recently suffered damages caused by the fire. From July 02 to 11, the 17 students worked alongside professional labourers in the foundation and the ground preparation. In addition they taught classes at nearby Dharapani Secondary School in Dharapani village. Whether the work was construction or teaching, they showed enthusiasm, team spirit and dedication and did their part effectively.

After their volunteering in the village, the students travelled to Pokhara, the popular Lake City and trekker’s hub, on July 12. This was their starting point to Annapurna trekking region. With Ace the Himalaya’s licensed and experienced trekking guide, they embarked on a 4-day trek to Poon Hill, which is considered one of the best points to view the mighty Himalayas.

The names of the 17 volunteers are:

We, along with the students and the teachers of Bhairabi Primary School and Dharapani Secondary School and the villagers, express our gratitude to the good-hearted volunteers from UNSW’s Global Village. We wish you all success in all your endeavors.